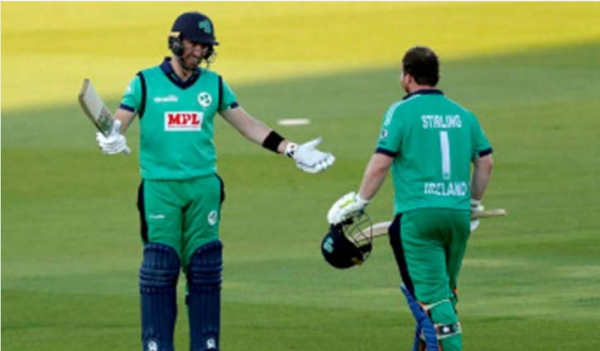 Ireland pulled off their second win against England and their first ODI victory against major opposition since the 2015 World Cup, with Kevin O'Brien, the hero of Bangalore, hitting the winning run after centuries from Paul Stirling and Andy Balbirnie had laid the foundations.

Ireland stunned England in a thrilling third one-day international, completing a chase of 329 with one ball to spare at the Ageas Bowl.

Paul Stirling smashed 142 off 128 balls and captain Andrew Balbirnie 113 off 112, sharing a superb stand of 214 for the second wicket.

Stirling was run out with 65 needed and Balbirnie holed out 15 runs later, but Ireland held their nerve to seal a seven-wicket victory in the final match of a series England won 2-1.

Kevin O'Brien and Harry Tector, who put on an unbroken 50, scored the eight needed off the final over as Ireland claimed only their second win over England in ODIs.

Eoin Morgan's 84-ball 106 looked to have put them on course for victory.

Morgan and Banton, who made 58, added 146 but both fell in quick succession in a collapse of 4-26 as England failed to take full advantage of being 190-3 in the 27th over.

Still, the world champions, albeit without many key players who are part of the Test squad, should have defended their total.

It was Ireland's highest successful chase in ODIs, beating their famous pursuit against England at the 2011 World Cup, and gave them 10 points in the qualification league for the 2023 World Cup.