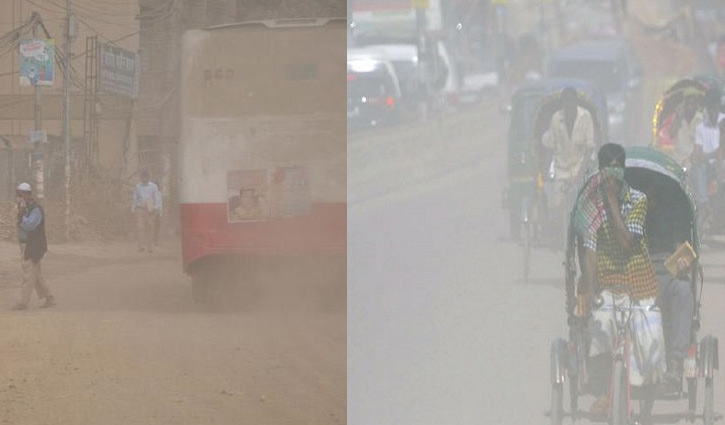 Air pollution continues to increase in Bangladesh especially in the capital Dhaka. According to a joint research report of the World Bank and the Ministry of Environment, Forest and Climate Change, the rate of air pollution in Dhaka is five times more than the sustainable level. Air pollution in Dhaka has taken a sharp turn in last few years. Fine particulate matter is detrimental to public health. Fine particulate matter measuring 2.5 microgram and 10 microgram is on the gradual rise. Parallely, the presence of sulfur dioxide and carbon monoxide is being visible in the air. According to US research organizations Health Effects Institute and the Institute for Health Metrics and Evaluation (IHME), fine particulate matter measuring 2.5 microgram is one of the detrimental matters existing in the air.

According to the media reports, it was found in Dhaka in last 15 days that most of time, the air in Dhaka was very unhealthy and sometime it also exceeded the dangerous level. Towards the end of 2017, a report published globally said Dhaka has ranked second on a global list of cities with worst air pollution. India’s Delhi tops the list, while Pakistan’s Karachi and China’s Beijing stand third and fourth, according to the State of Global Air Report 2017. Environmentalists say black smokes emitted from industries, factories and old motor vehicles and open dustbins in the capital increase the rate of air pollution gradually. There is no way to breathe in the open air. Most of the city dwellers are now seen to use masks. Due to extreme exposure to air pollution, people are suffering from various diseases such as breathing problem, asthma, heart disease and stroke, lung cancer etc. Not only that, air pollution is causing premature deaths to people.

A good number of brick kilns located near Dhaka are said to be one of the main reasons behind the air pollution. As per laws, there is no rules for setting up brick kilns adjacent to dwelling places. But many are not complying with that law. Buildings are being constructed in Dhaka in an unplanned way. Unplanned digging in the capital is causing air pollution. Besides, air pollution is being happened at an alarming rate due to location of industries and factories in Narayanganj, Munsiganj, Savar, Dhamrai, Tongi, Jatrabari, Lalbagh and Hazaribagh.

There is pollution available not only in the air of Dhaka but also in the water of rivers, canals located close to the metropolitan cities. Air pollution is gradually increasing due unplanned urbanization, industrialization, chemical wastes from industries and factories, wastes mismanagement. Trucks having no fitness entering Dhaka every day, resulting in black smokes. Black smokes and chemical substances produced from defective buses, reconditioned vehicles and different factories are spreading to air.

It is possible to prevent this pollution or reduce largely if we are conscious of it. It needs to ensure punishment for those violating environment laws. Illegally constructed brick kilns that develops around the capital should be demolished. Emphasis should be put on building environment-friendly brick kilns. Monitoring cells should be formed to see whether rules are being maintained during the construction of buildings.

Authorities concerned will have to take effective steps to ensure proper application and implementation of Environment Protection Act to address the problems. The administration will have to adopt fruitful steps to find out key reasons behind air pollution and ways to prevent it. People will have to be made more conscious about it involving government and non-government agencies.