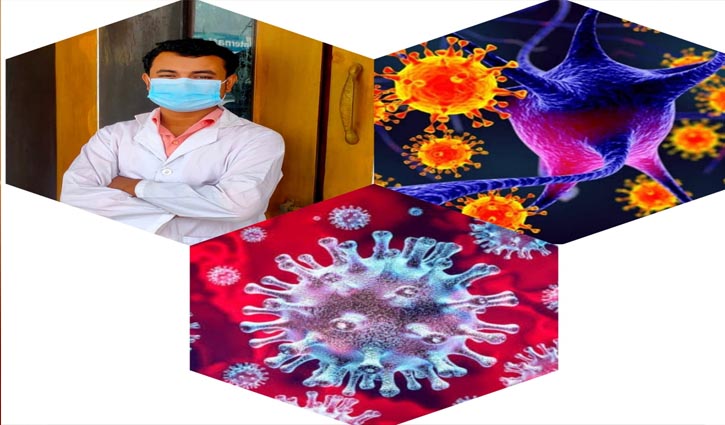 The people of the present world are about 800 crores. The human body has more than a thousand times its life unit or cell. That is about 800 thousand crore cells. There are many different types of cells in the human body in number, size, and type.

The particles we are able to see with the naked eye (100 microns) are more or less one-tenth the size of our body cells (10 microns), which cannot be seen with our naked eye. Again, each class of cell has its own characteristics and life cycle. Some may live only a few hours, while others may live to the last day of human life.

On average, millions of cells are growing and dying in our bodies every day. All living things, including humans, are constantly struggling to cope with the adverse effects of the environment.

So, when the environment is good, just as we are good, otherwise we suffer, the same happens in the cell society. The number of cells at risk is manipulated. One of the causes is a bacterial infection. Creating new cells is adapted to their offspring. Accordingly, the body is bound in a melody, and we are healthy. But when an unknown particle enters into the body, certain cells attack the unknown particles by increasing their own protection power to maintain the balance of the body. These are basically immune cells, present throughout the body, mainly in the blood and lymph, white blood cells in a variety of functions to protect our bodies.

The result of entering an unknown particle is slight sneezing, runny nose, runny nose, cough, fever - which is called 'inflammation' in scientific terms. This class of cells is always protecting us from the ill effects of the environment. These are the first-line soldiers or guards of our bodies. And that is innate immunity. Their fight started when I found a little unknown thing in our body.
For the passage of this initial stage, the immune cells of the body become active, defeating the foreign unknown things. Of course, it takes one to five days. If the body signals that the enemy or unknown particle could not be initially subdued, then adaptive immunity is activated.

It starts in three to seven days. This time a very powerful tool - T cell and B cell - is launched in the war. In the first case, the immune system swallows the germ, cuts it off, carries its fragments, and signals to the T cells. With that, the infiltrated enemy (antigen) is sufficiently overpowered and defeated. Otherwise, in the chemical signals, germ-invasive special T cells and mighty B cells - which produce antibodies and memory B and T cells - are stimulated. In the practical management of the chemical resources created by the combined efforts of immune cells, the human body is protected.

Again, we need air, water, and food for our survival. Through them, a group of unknown, pathogenic germs get a chance to enter the body. In addition, many insects, birds, and animal-borne germs, including humans, enter our bodies. And immune cells identify them as enemies. The germs that infest the disease are much smaller than the normal size of our cells.

They are huge in number. These are the primitive biological members of our favorite planet. Most of them don't care about us, so we don't care. Only a handful of microscopic fauna and organisms endanger us. These are known as bacteria (one tenth of a cell), viruses (inanimate chemicals, one-tenth of a thousand bacteria), fungi or parasites.

The germs which can live in environment of our body weather, nearby air, water or food, even if they defeat our first attack, the next intrusion may not be as deadly. Early symptoms are often seen. At that point, the body's immune cells become alert. Memory B and T cells become active, saving. So, humans adapted to certain geographies coexist with those germs. This is called   'hard immunity'. But the first push can be quite deadly. If left unmanaged, they can be left astray and lose the right path. We can feel it now.

The one who wins the conflict between organisms and germs survives. The influx of illnesses that we have over time due to immunity, including the common cold-fever, chicken pox; Dust-intestinal during and after the rainy season; I have seen cough-cold-fever etc. in winter.

If the outbreak of the disease suddenly exceeds the estimated number and spreads to other geographical boundaries, the number of deaths abnormally rising, we call it epidemic or epidemic (such as pneumonia, cholera, intestinal, tuberculosis, malaria, plague, Polio).

But the disease and its causes (germs) that migrate and overwhelm the people of other countries and push them to their deaths, while its horror stuns people, teaches them to think and invent new ways of living, is pandemic. Such as cholera, tuberculosis, smallpox, polio, AIDS, various fevers - bird flu, swine flu or current panic, coronavirus virus.

With the development of civilization, people have become abnormally dynamic. The impact of which has multiplied the epidemic. So, the epidemic that was once pandemic-epidemic has turned into pandemic at the hands of civilization. Possible typhoid (caused by Salmonella typhi bacteria) and / or Ebola viruses in the ancient city of Athens in 430 BC.), Even nearly 800 years later (1346-1353), the plague killed about half of Europe's population, known as the 'Black Death'. The surviving germ-carrying flies on rats arrived on a ship from Central or East Asia via the Silk Road to a port in distant Europe.

Thus, in the sixteenth century (1519-1532), the outbreak of Smallpox led to the destruction of the Aztec and Inca civilizations in the United States. Yellow fever, or influenza virus, has killed nearly one million people worldwide, including Russia and Europe, in just five weeks (1889-90). In the United States, Polio (1918) and World War I (1918-1920) caused the Spanish flu, which killed more than 50 million people.

India, the world's second most populous country, has a high incidence of infectious diseases due to natural causes. According to estimates, about 8,000 children died in the oldest spring epidemic in Goa in 1545.The Indian plague was eradicated in 1977 with the help of the antidote invented by Edward Jenner. There are basically two pandemic epidemics in India. One, cholera and two, influenza. The cholera epidemic has circled the globe eight times in three centuries, and has not stopped. Cholera has claimed more than 50 million lives in India. And the Spanish flu of 1918, including the 2009 H1N1 influenza, crippled the entire world, including India.

As a means of survival, with the discovery and application of antidotes, we have escaped many epidemics. In this regard, diphtheria, pertussis, and tetanus (DPT) vaccines, tuberculosis vaccine (1951), polio (OPV, oral polio vaccine, 1967), hepatitis DNA vaccine 1997. We have the technology to invent and develop the flu virus vaccine (2009), oral cholera vaccine (2010) and meningitis vaccine (2010) and above all the Japanese encephalitis vaccine (2012). In these cases, we have become quite self-sufficient.

But the novel coronavirus or SARS-CoV-2 which is becoming unknown as Covid-19. Such a devastating pandemic is rare in the history of human civilization. The SARS-CoV-2 virus is a round body with a thorny covering.so the virus is very small in size. Half of a coccus bacterium. This tiny virus is making the earth cry. The thorn in its side is the spike protein.

When SARS-coV-2 or covid-19 somehow penetrates the nostrils or respiratory tract, it penetrates into the cells of the sensitive respiratory tract, confirming its position and increasing in number. As well as the body's immune cells begin to fight. Inflammation causes sneezing, coughing and fever. If the patient's internal immunity is stable, he survives. Therefore, the infection is mainly among the people in their sixties and especially those who have the diseases (diabetes, various heart diseases, allergies, schizophrenia, etc.), they are relatively easily infected and die.

In the last period of this article, I will say, this life threatening virus will not go away from the world easily. We need Healthy ways to strengthen our immune system to protect us from these life threatening viruses that include, don’t smoke, eat a diet high in fruits and vegetables. Exercise regularly. Maintain a healthy weight. If you drink alcohol, drink only in moderation. Get adequate sleep. Take steps to avoid infection, such as washing your hands frequently and cooking meats thoroughly.