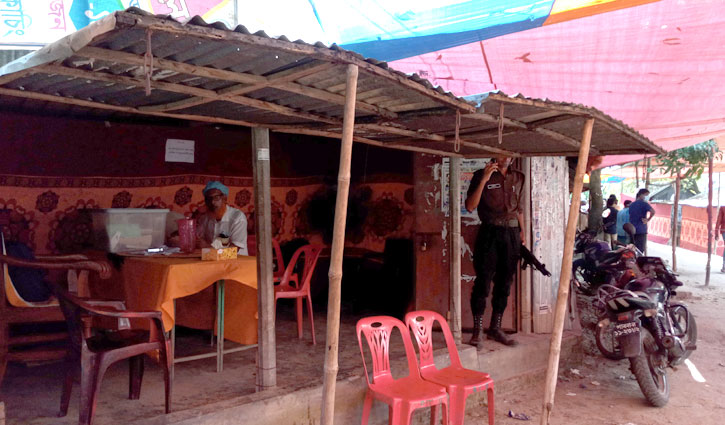 Voting of Union Parishad on Tuesday (October 20) was held at tea stalls, after announcing it as polling centre, at Bhangura in Pabna. Members of police and Ansar were deployed to ensure security at the centre.

The scenario was noticed at ward no 4 under Mondatosh Union Parishad of the upazila.

Concerned people said, “There are no scheduled polling stations in this ward. That’s why, two tea stalls were made polling stations at Tunipara Mandalmore. One is for female voters while the other is for male. A small drug store is built next to the office room of the presiding officer.

Presiding officer Md Ali Azam said, “There is no designated polling station in ward 4 of this union. There is no educational institution. For this reason, the Election Commission (EC) has directed to use the shops in this market as polling stations.”

Assistant presiding officer Md Mofazzal Hossain said, “The total number of voters in this center is 558. Till 10:15am, around 20/25 percent of the voters exercised their franchise. The others voted at different times of the day. However, there was no disturbance in the tea shop. On the contrary, the voters happily voted in this exceptional polling station.”

The total number of voters in Bhangura and Mondatosh union is about 21,000. Nine candidates have contested for the post of chairman.