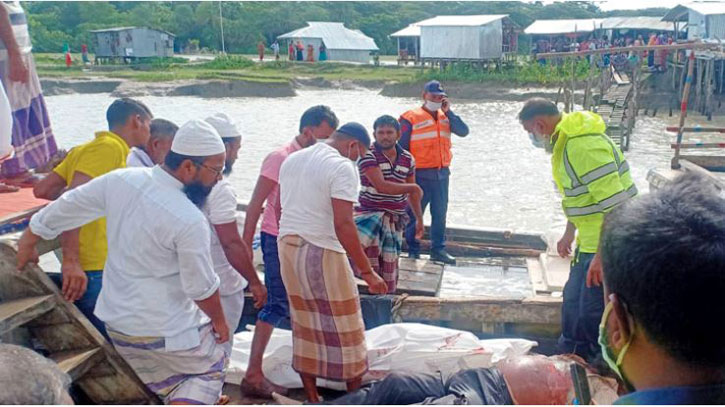 Members of Coast Guard with the help of local people recovered the bodies of five people, who went missing after a speedboat capsized in Agunmukha river in Rangabali upazila of Patuakhali on Thursday (Oct 22) amid inclement weather.

The bodies were recovered from different points of the river in the wee hours of Saturday (Oct 24).

Confirming the matter, officer-in-charge (OC) of Rangabali Police Station Ali Ahmed said, “The bodies have been kept at Koralia launch ghat. After maintaining formalities, they will be handed over to their families.”

Quoting locals, OC Ali Ahmed said a speedboat carrying 18 people sank in the middle of Agunmukha river due to strong current while heading towards Panpotti from Koralia on Thursday.

Thirteen passengers of the speedboat managed to swim ashore while four remained missing.

On information, divers and coast guard members went to the spot and conducted a salvage operation.

Later, the coast guard members recovered the bodies of five missing people on Saturday morning, 36 hours after the incident.

Mashfaqur Rahman, Rangabali Upazila Nirbahi Officer (UNO), said, “The accident occurred for not complying with the ban on the operation of speedboat. Those responsible for the incident will not be spared. Legal action will be taken against those defying the ban.”