A death-row convict has died at Kashimpur High Security Central Jail in Gazipur.

The inmate was known as Kanti Marak, 44, son of Nitish Manda of Panihata Kekamari area under Nalitabari of Sherpur.

He was declared dead after he was rushed to a hospital around 8:00 am on Saturday (January 16).

He said, “Kanti Marak was sentenced to death in a case filed with Nalitabari Police Sation under the Women and Children Repression Prevention Act. He had been confined in the jail for the last three years. He fell sick on Saturday morning. He was rushed to Gazipur Shaheed Tajuddin Ahmed Medical College and Hosital where duty doctors declared him dead around 8:00 am after conducting different tests.”

“The body will be handed over to his family after completing legal procedures,” the Jail Super added. 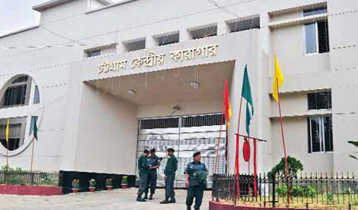