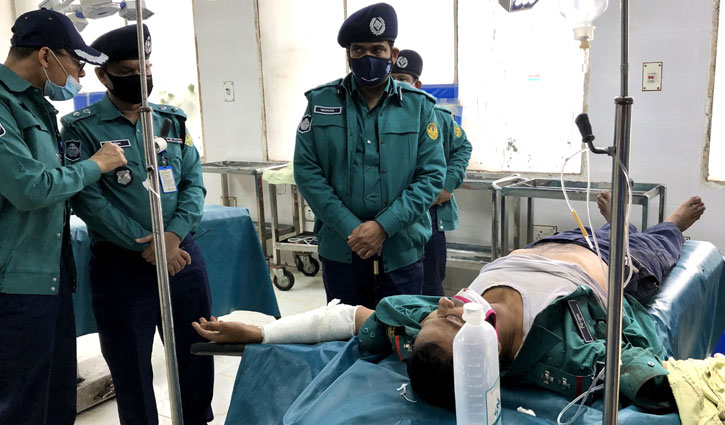 A young biker has beaten up a traffic sergeant as he wanted to file a case against him, leaving the police personnel injured.

The policeman was set to lodge the case against the biker as he did not wear helmet. Being enraged, the youth attacked the sergeant.

The incident took place at Bilshimla Oitijya Chattar in the Rajshahi city on Tuesday (January 19) noon.

The injured traffic sergeant was known as Bipul Kumar. He sustained injuries at the both hands and different parts of the body. He was admitted to Rajshahi Medical College and Hospital (RMCH).

Constable Ismail Hossain who was on duty with sergeant Bipul Kumar denied to talk over the matter.

Meanwhile, police have held two persons for interrogation. One of them is tea stall owner while another works at a furniture shop near the spot.

According to witnesses, the youth was riding his bike without helmet. The traffic sergeant stopped him and asked to show the documents. He was also about to file a case as the youth had no helmet. At that time, the biker stepped on the footpath and locked into altercation with the sergeant. At one stage, he brought a wooden stick and started to beat the cop, leaving him laid down on the soil. The youth fled the scene leaving his motorbike on the spot as locals rushed to spot. Being informed, senior officials of police visited the spot.

According to the two detained persons, the youth is known as Belal of Bhatapara area of the city Lakshmipur. He hangs out in front of the tea stall most of the time.

Mazharul Islam, Officer-in-Charge (OC) of the city’s Rajpara Police Station, said, “Bipul sustained wound on his both hands and different parts of the body. I have yet known details over the incident. Legal steps would be taken through discussing the matter with Bipul after he came round a bit.