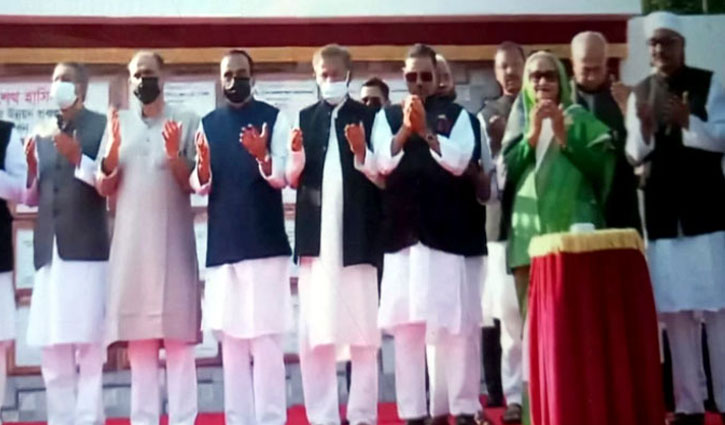 Prime Minister Sheikh Hasina has inaugurated 29 development projects and laid foundation stones of six other schemes to ensure overall development of Chattogram and described those as gifts from her government.

She inaugurated the development projects from the grand rally held at the historical Polo Ground on Sunday (December 4).

Chattogram city, north and south district units of the ruling AL organised the mammoth public gathering that turned into a human sea.

After inaugurating and laying foundation stones of the projects, Sheikh Hasina said, “All these development projects are gifts from mine,” adding that the Awami League is the only government which has carried out tremendous development of the port city.

The development schemes inaugurated by the premier include the Halda River and Dhurong Canal Bank Conservation and Flood Control Project in Fatikchari and Hathajari upazilas of the district, Rehabilitation (1st Revised) Project through Slope Protection Work in 72 No. Polder Erosion Prone Area of Sandwip upazila and Permanent Rehabilitation scheme (2nd Revised) comprising Polders of 64/1A, 64/1B, 64/1C of Banshkhali upazila.

Among other projects, the construction work of 4-storey building of Sontoshpur high school in Sandip upazila and 10 storey academic building of Govt. City College under Double Mooring Thana was also opened.

The prime minister also laid foundation stone of six development projects that include construction of ancillary facilities including jetties in Mirsharai and Sandwip parts of Chattogram under the Ministry of Shipping, establishment of UN Green Garden with modern facilities in Panchlaish residential area under the Ministry of Housing and Public Works and construction of BPC building in Chattogram under the power department.