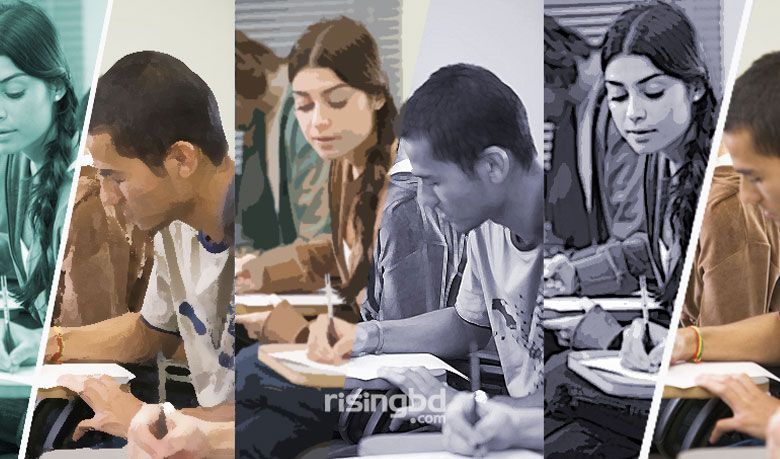 During my HSC examination, I experienced bitterly an unforgettable ingratitude in a female classmate of mine which made me understand the real disposition of some of the women in general though generalization of this kind of disposition might not be equally applicable for all women. This girl was my classmate since the last class of primary education at school to this college at which the examination was being held. Having considered all of her manners and behaviors expressed in her recklessly roaming hither and thither, loudly talking with someone either for little or no reasons, she may be called a jolly minded and free mixer girl with anyone. It is mentionable here that I had always been a bit shy in my nature being a boy and an unasked for conversation with a woman especially with a girl made me very coy.

After appearing in the banking examination, I came out of the exam hall. I startled at the sudden greetings of a womanly voice and turned my eyes in that direction. I found her coming to me, she stood by the very near to me and began to say something. I felt ashamed amongst the other students at her close familiarity and physical vicinity of her standing position. Having observed this situation, the students nearby goggled to each other’s face which did not escape my ever vigilant eyes. I told her, "Finish your talking as fast as possible". She asked expressing her keen desire, "Will you keep a wish of mine?" I promptly asked "What do you mean by your wish?" She said, "I wish to sit by the side of you at the time of my next two examinations." It is mentionable here that the papers of next two examinations were Bookkeeping and Accounting. I asked, "How will it be possible for you to sit by my side, because your exam is being taken in another room." She said in the voice choked with feelings, "I will make all arrangements for that; don’t bother of it." Thinking it to be an impossible task, I assured her of making a room for her in a vacant seat by my side. In sooth, I was in utter ignorance about the unfathomable power of the woman folk especially of a young girl like her in convincing the minds of the so called men.

At dusk, I came home with a mind full of apprehensive feelings and uneasiness. The thinking about her at intervals in my reading at that evening put me in a restless situation. However, I appeared the college sitting for the examination at the specific time for bookkeeping. As ill luck would have it, I was informed by one of my class friends appearing at the examination that our next two pending examinations had been declared to be held in the big hall room by the order of the Principal of the college. Situations having been turned in such a way, actually her fortune was made and her desire was going to be fulfilled at the cost of my valuable moments in the examination hours i.e. I would be disturbed at intervals.

On entering the room, I was accosted by that girl and was shown the room to sit at the same bench. I was terribly perplexed at her sudden unexpected greetings and showing the seat at the same bench for I could not say ‘no’ to her being the long-run class friend. A shade of deep thought clouded my face within moment thinking within myself, "How shall I be able to attend the examination peacefully sitting by the very near side of the talkative flattering girl who will not spare any moment in disturbing me." One of my intimate friends for whom I was waiting at last came into the examination hall. I consulted with him discussing about all the matters within a short time and chose to sit at the next bench of the girl instead of sitting in the same bench of her. I was compelled to sit there out of courtesy and humanitarian grounds. Besides the above, there was another reason i.e. while we, the promoters undertook a risk of publishing a Journal named “Ulka” from Bagerhat town in 1976; she actively participated in publishing that journal with necessary contributions. Thinking as above, I could not change that seat at the request of other friend also.

By this time, the invigilators came in with the scripts and questions. The bell rang and my mind also began to beat faster with unknown fears of being disturbed. Scripts and questions were distributed among the students duly. Then I looked at the girl, even she was hesitating to write down the particulars of the subject on the front page of the script and looked at my khata (answer script).

I began doing the sums at first. The girl also did so. In doing bookkeeping sums, one should be careful in putting the right items in the right sides – either debits or credits. The girl put some items in some places where those were not applicable. For which the sums would not be correct in any way. On detecting the wrongs by me, she enquired about that, some other correct treatments and some other possible doubtful items. For doing some of the other sums, she copied from my khata also. I was over-sure that but for my help, she would not be able to put right answers of major sums of the questions. The shrewd girl being dissatisfied with my answers sometimes, kept engaged herself in talking with a distant friend who was more or less dependent on me. To tell the truth, the two were of two diverse sides of me and their constant talking did me much wrong in doing the sums properly. She asked me answers of questions repeatedly, besides she copied many theoretical short answers hearing from me. The most bothering matter was the constant talking and calling me and my other friend by names frequently made me forgot of some important points of answers of the questions which I could not recollect in the exam hall.

Some days elapsed after that examination. It was come to my ears that the girl had said to some of my friends that Mastu had not helped her in the examination hall. To my utter surprise, I thought "How may it be possible for her to spread allegations upon me denying that fact?" This kind of ingratitude troubled my mind very profoundly.