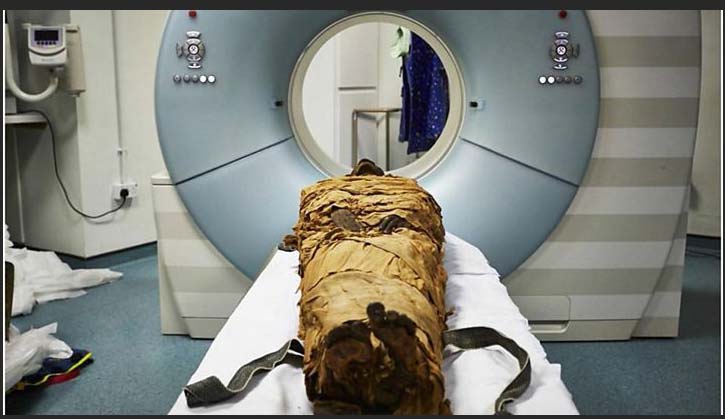 Scientists have fulfilled a mummified Egyptian priest's wish for life after death - by replicating his voice with artificial vocal chords.

Nesyamun's voice has been reproduced as a vowel-like sound that is reminiscent of a sheep's bleat.

The priest lived during the politically volatile reign of pharaoh Ramses XI, between 1099 and 1069BC.

As a priest in Thebes, Nesyamun would have needed a strong voice for his ritual duties, which involved singing.

When Nesyamun died, his voice fell silent, but 3,000 years on, a team of researchers have brought it back to life.

They have done so by producing a 3D-printed voice box based Nesyamun's vocal tract, which was scanned to establish its precise dimensions.

By using the vocal tract with an artificial larynx sound, they synthesised a vowel sound meant to be similar to the voice of Nesyamun.

It is believed to be the first project of its kind to successfully recreate the voice of a dead person through artificial means. In the future, the researchers hope to use computer models to recreate full sentences in Nesyamun's voice.

The research - carried out by academics at Royal Holloway, University of London, the University of York and Leeds Museum - was published in the Scientific Reports journal on Thursday.

The voice recreation technique "has given us the unique opportunity to hear the sound of someone long dead", said study co-author Joann Fletcher, a professor of archaeology at the University of York.

Prof Fletcher told the BBC it was Nesyamun's "express wish" to be heard in the afterlife, which was part of his religious belief system.

"It's actually written on his coffin - it was what he wanted," Prof Fletcher said. "In a way, we've managed to make that wish come true."

In humans, the vocal tract is the passage where sound is filtered. That sound is produced at the larynx - the organ commonly known as the voice box - but we only hear it once it has passed through the vocal tract.

To copy the sound produced by Nesyamun's vocal tract the exact dimensions of it were mirrored in 3D-printed form.