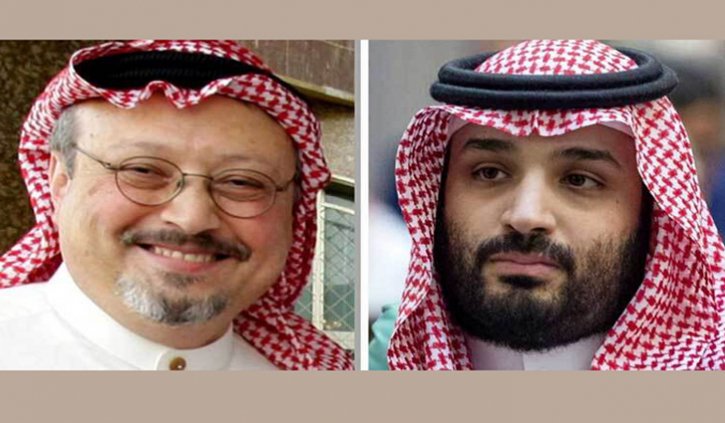 The United States on Friday for the first time publicly accused Saudi Crown Prince Mohammed bin Salman of approving the gruesome murder of dissident journalist Jamal Khashoggi, unveiling a raft of punitive measures but stopping short of directly targeting the powerful heir apparent, according to the US intelligence report.

This has been reported in the news agency Reuters. The US report was released on Friday.

The prince, who is de facto ruler of the longtime US ally and oil provider, "approved an operation in Istanbul, Turkey to capture or kill Saudi journalist Jamal Khashoggi," said an intelligence report newly declassified by President Joe Biden's administration.

The report said that given Prince Mohammed's influence, it was "highly unlikely" that the 2018 murder could have taken place without his green light. The killing also fit a pattern of "the crown prince's support for using violent measures to silence dissidents abroad."

Khashoggi, a critic of Prince Mohammed who wrote for The Washington Post and was a US resident, was lured to the Saudi consulate in Istanbul in October 2018, then killed and cut into pieces.

The Treasury Department announced it was freezing assets and criminalizing transactions with a former intelligence official as well as the Rapid Intervention Force, an elite unit that the report said "exists to defend the crown prince" and "answers only to him."
In honor of the slain writer, Secretary of State Antony Blinken announced the "Khashoggi Act" that will ban entry into the United States of foreigners who threaten dissidents or harass reporters and their families and immediately placed 76 Saudis on the blacklist.

"We have made absolutely clear that extraterritorial threats and assaults by Saudi Arabia against activists, dissidents and journalists must end. They will not be tolerated by the United States," Blinken said in a statement.

But the United States stopped short of directly targeting the 35-year-old crown prince, known by his initials MBS, with officials contending there was no precedent for sanctions on a senior leader of an ally.

Blinken, questioned by reporters, said that "this is bigger than any one person," explaining that Biden is trying "not to rupture the relationship, but to recalibrate to be more in line with our interests and our values."
An advocacy group founded by Khashoggi, Democracy for the Arab World Now, called on Biden to go further by imposing sanctions on Prince Mohammed -- with a number of lawmakers from Biden's Democratic Party also pushing for more action.

"We must also ensure that there are real consequences for individuals like MBS; if not, autocrats around the world will get the message that impunity is the rule," said Bob Menendez, chairman of the Senate Foreign Relations Committee.

The Saudi foreign ministry in a statement denounced the "negative, false and unacceptable assessment" and rejected "any measure that infringes upon its leadership."

The Saudi government, which in the initial days said it had no information on Khashoggi, says it accepts responsibility for the killing but casts it as a rogue operation that did not involve the prince.

Biden's decision to release the report -- first completed under Donald Trump -- was a sharp departure from his predecessor, who had vowed to keep working with Saudi Arabia due to the kingdom's lavish purchases of US weapons and shared hostility toward Iran.

Biden spoke by telephone late Thursday with 85-year-old King Salman after the White House made clear he had no intention of speaking to the crown prince, who by contrast had formed a friendship with Trump's son-in-law Jared Kushner.

A veteran Saudi journalist who had gone into self-exile, Khashoggi was told by Saudi Arabia's ambassador to the United States to go to the kingdom's consulate in Istanbul if he wanted to obtain documents for his forthcoming marriage to a Turkish woman, Hatice Cengiz.

Within minutes of entering the building on October 2, 2018, the 59-year-old was strangled and his body dismembered by a 15-member team allegedly sent from Riyadh under the direction of a top aide to Prince Mohammed, Saud al-Qahtani.

The intelligence report said seven of the 15 Saudis came from the Rapid Intervention Force, which it said had earlier acted to suppress dissent in the kingdom and abroad.

The Central Intelligence Agency had quickly concluded with high confidence that Prince Mohammed ordered the assassination but Trump refused to release the report and called for moving on.

A US official said it was "obviously reality" that the new administration will still have to deal with the prince, who is also defense minister, on issues including oil, Iran and Yemen, where Biden has cut support for Saudi's devastating offensive.

Few observers of Saudi Arabia believe the murder could have taken place without the knowledge of Prince Mohammed, a calculating strongman who has jailed a number of critics and locked up competing factions in the royal family.

Under heavy pressure from the United States and the international community, the Saudi government put some of the perpetrators on trial.

The closed-door trial exonerated the two officials widely seen as the masterminds: Qahtani, the royal court's media advisor, and deputy intelligence chief Ahmed al-Assiri -- who was slapped with sanctions Friday by the Treasury Department.

Five unnamed defendants were sentenced to death and three others given stiff prison terms. Nine months later, the death sentences were withdrawn by the court and replaced with sentences of up to 20 years. Rights groups called the case a farce but it satisfied the Trump administration, which blacklisted 17 suspects including Qahtani but not Assiri.