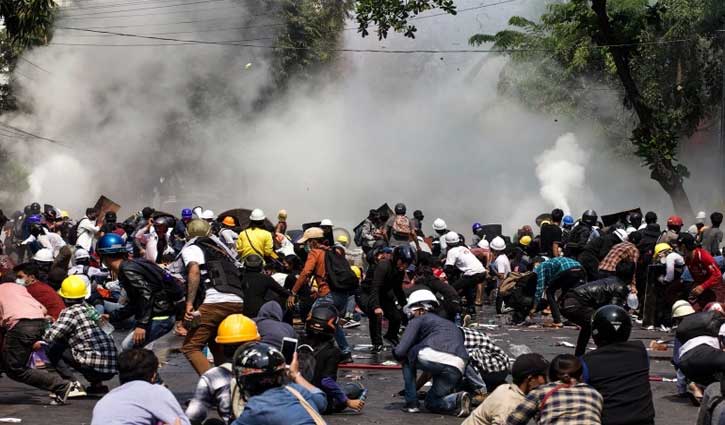 At least 38 people were killed in anti-coup protests in Myanmar on Wednesday, the United Nations said, in the bloodiest crackdown yet on peaceful demonstrations against a military coup.

Security forces opened fire on people protesting against military rule across Myanmar, a day after neighbouring countries called for restraint and offered to help resolve the crisis.

Describing Wednesday’s death toll as “shocking”, Christine Schraner Burgener, the UN’s envoy on Myanmar, said in New York there were “now more than 50 people [dead] since the coup started and many are wounded”.

“I saw today very disturbing video clips. One was [showing] police beating a volunteer medical crew; they were not armed,” Burgener told a virtual briefing.

“Another video clip showed a protester was taken away from police and they shot him from very near, maybe one metre. He didn’t resist his arrest and it seems he died on the street.”

The envoy said about 1,200 people have been detained in Myanmar since last month’s coup and many families do not know their health condition or whereabouts.

Myanmar has been in chaos since February 1 when the military detained elected leader Aung San Suu Kyi and much of the country’s civilian leadership, and seized power in a coup d’etat.

The military justified the takeover with unsubstantiated claims of voter fraud in the November 2020 election that returned Aung San Suu Kyi’s National League for Democracy (NLD) to power in a landslide. The election commission, whose members were also detained in the coup, said the vote was fair._Al Jazeera