Election Commissioner (EC) Mahbub Talukder has said that he believes voters’ reluctance to election is an evil sign for democracy.

He made the opinion while reading out a written statement to the reporters on “The recent Municipal and UP elections and My words” at his own office at Nirbachan Bhaban in the capital’s Agargaon on Wednesday (September 22) afternoon.

He further said, “I served as the Acting Chief Election Commissioner (CEC) for six days from September 17 to September 22. Some journalists want to know my successes and failures over the 160 Union Parishad and nine municipal elections held at that time. It is not possible to change the electoral management abruptly in such a short time. Even then some words remain left.”

He said, “Three people were killed in the mentioned election. It is extremely painful. I always say that election is not bigger than life. However, the fierce competition in the UP elections could not resist violence. Whatever the incident or accident in the election occurred, the responsibility goes to EC. However, measures have been taken to prevent the recurrence of all untoward incidents such as accidents, chaos, illegal sealing of ballots, intimidation of opponents etc.”

Mahbub Talukder said, “During my tenure in the local government elections, the law enforcement agencies were specially warned to carry out their duties legally. Those responsible for the killings have been detained, subject to evidence. Those who made showdown with weapons and sticks were also detained after watching video footage. Further investigation will bring many more under the law. No one has been and will not be exempted in preventing violence. A Member of Parliament (MP) has even been sent a warning for violating the Electoral Code of Conduct.”

He said, “Voter turnout in this year’s Union Parishad elections was fairly good, at 69.34 percent. But the uncontested election festival and the elected of 43 candidates without any competition in UP polls has tarnished the image. On the other hand, in nine municipalities, three candidates were elected mayor without contest. Since election is a selection among many candidates, is it possible to be elected without contest?” 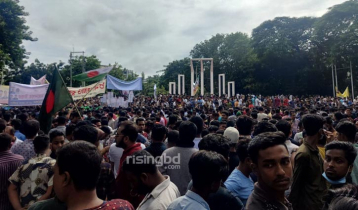