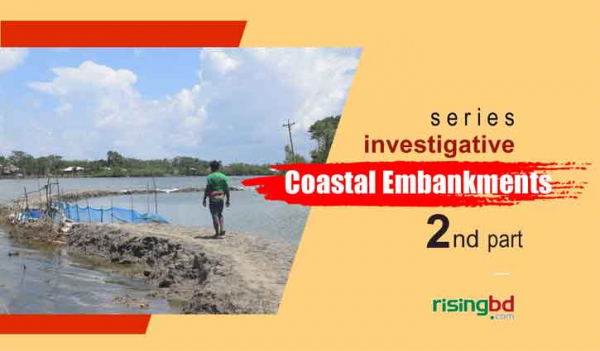 Nubaid Sardar, a resident of Gobra-Ghatakhali village under sadar union of Koyra upazila in Khulna, raised a finger and said “We are seeing that beel; only shrimp farms! The croplands have been consumed by salt. I do not know there is any law in the country. But, those who cultivate shrimp do not care about the laws”.

Nubaid Sardar was standing on a damaged embankment which can be said an ‘ile’. The house of Abul Bashar Sheikh is located on the damaged portion of the embankment. The strong current of Cyclone Amphan flowed over the house. Abul Bashar said “We are working people. The owners of the shrimp farms have no problem as they are cultivating shrimps like umbrellas in a town”.

It is known that this aggression of shrimp cultivation started in the eighties. With the support of the government, the wealthy influential people entered salt water of the sea into croplands, ignoring the rules and regulations. Before the construction of the embanments, with tide water, the silt used to go down through the rivers to the sea. But due to Farraka Dam, the rivers of the Khulna region lost their normal speed due to lack of upstream water. Bottom of the rivers started filling up with silt. At one stage, river beds become higher than near lands. For this reason, the water of lands did not go down through the rivers, as a result waterlogging is created in the area like Bhabdaha, Beel Dakatiya. This way the natural ecosystem of the region has lost its fetures. 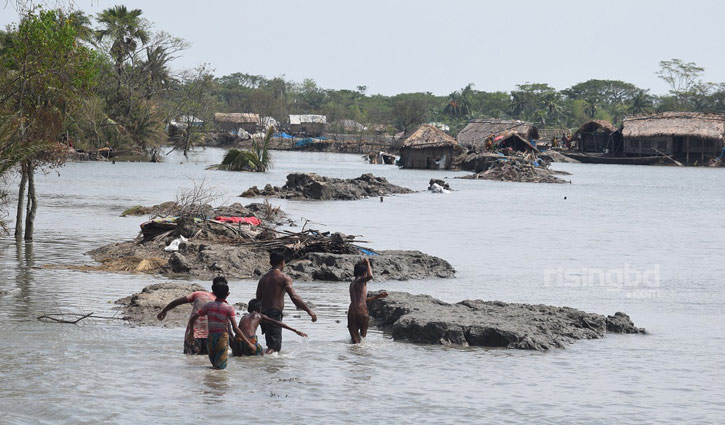 However, there is no disagreement that uncontrolled shrimp farming is one of the major causes of the destruction of coastal life. Locals, experts, even two government ministers and a secretary have directly blamed the reckless shrimp farming for damaging the embankments. Even the Prime Minister himself went to Shyamnagar in Satkhira in 2010 and warned the shrimp farmers saying that “You will make money by farming and bring disasters cutting the WDB embankments, it will not be allowed to happen”.

There are embankments in one side of rivers, and in another side there are many shrimp farms. It is the common scenario of the region. Salt water is entered into shrimp farms from the rivers. According to the rules, for this, they have to apply to the executive engineers of Water Development Board (WDB). After investigation, it found that executive engineer of an upazila gave a permission to build a paved drain. According to the Ashashuni sub-divisional engineer's office in Satkhira, water is being pumped from different rivers in more than three hundred places by cutting the WDB embankments in the upazila to shrimp farms. But only 40 were approved for this work. Shrimp farming started in the early eighties with the help of loans from international banks.

Isn't shrimp farming making the embankments fragile? Asked about the issue, Deputy Minister for Water Resources AKM Enamul Haque Shamim said "The embankments are becoming fragile as there is water on both sides of the embankments. Shrimp farms have been made close to embankments. We are oberving the matter. We have prepared a letter, and we will send it to DCs”.

“In the letter, we said shrimp farms should be made at least 300 meters away from the embankments. No reservoir can be kept near and inside embankments. If any one disobeys this order, we will take strict actions against them”. 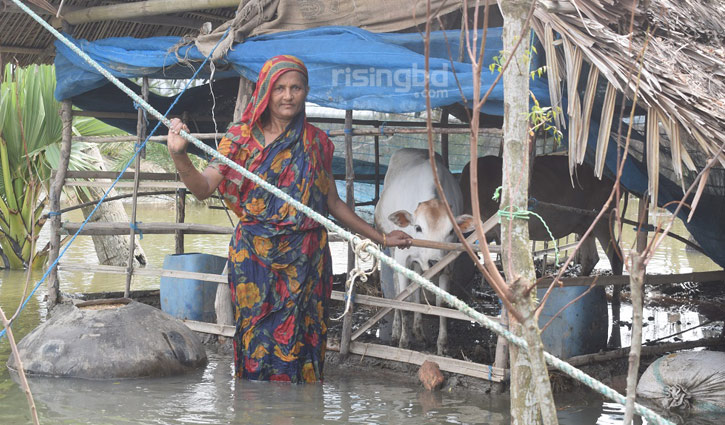 Confarming the matter, Satkhira Deputy Commissioner SM Mostafa Kamal said "Yes, we have received instructions from the Deputy Minister. I have also started working following the instructions. If anyone does any activity within 100 meters of embankments, we will take action against them according to the laws. '

Earlier, many cases were filed for voilating rules but the culprits were released. We know several such cases. Responding to a such question, Mustafa Kamal said “I don’t want to talk about what happened in the past. I want to talk about the things that will happen in the future. UNOs have been instructed. Emphasis has been given on making people and people's representatives aware about this. We will work in two ways”. '

To respond another question about any action in this reagrd so far, he said, “No, but we will start activities after Eid.”

Laws just in books
In order to prepare this report, the laws, policies and rules of the concerned government departments have been reviewed and it has been seen that the issue of protection of embankments has been mentioned very clearly in each place. Article 5.75 of the National Shrimp Policy-2014 says ‘Shrimp farming should not be done by cutting the embankments and entering salt everywhere. It should be done in designated places entering salt water in a planned manner.

In the case of embankments, the original design of the Water Development Board will have to be followed.

Section 4.1 (D) of the National Water Policy-1999 says the management of catchment areas must be ensured to preserve the characteristics of the river basins and prevent land erosion through afforestation and controll of river erosion.

Article 5.6 (D) of the Integrated Small Irrigation Policy says the management structure of more than 100 polders in the coastal areas should be used to ensure the conservation and use of syrupy water in the irrigation system.

In fact, the situation in the coastal areas is confined in books. In this regard, Satkhira Climate Council Member Secretary Principal Ashek-e-Elahi said “Shrimp farming is not being done systematically. Shrimp farmers are influential. They cut embankments to enter salt water into their shrimp farms and make farms near embankments as a result salt water enters into croplands leaking embankments. We have been seeing for many years that there is a law in this regard, but it is not being enforced”.

Numerous number of sluice gates can be seen in the Amphan-hit areas. The water inside the polders is supposed to be removed from those. But when asked why this did not happen, the locals said that the sluice gates were forcibly occupied by shrimp farmers, and salt water was entered from there. Sluice gates are opened and closed at the behest of influential shrimp farmers. Due to mismanagement, silt has been deposied outside the sluice gates. As a result, outer parts of sluice gates are much higher than the lands. As a result, if tidal water enters, it cannot come out. The investigation found that water intered into araes due to cyclone Ampan but it did not come out even after more than a month of the cyclone.

Is the embankment protection law applied? When asked, Water Resources Ministry Secretary Kabir bin Anwar said “This is a major problem. The owners of shrimp farms do not want to accept anything. We have given the responsibility to the District Water Committee to sit with the shrimp farmers so that they take water from the internal canals. They are not allowed to cut embankments”. It is learnt that that shrimp farms damaged the embankments before these warnings of the ministers and secretaries. There is a provision in the Disaster Management Act-2012 for direct punishment if an embankment is damaged. Even if someone is harmed by this, he can file a case with the court demanding compensation.

Embankment protection has been mentioned in various rules and regulations in various laws including Bangladesh Water Act-2013 and Coastal Area Policy 2005. According to the records of four police stations of four upazilas and the concerned courts it was found that in the most of the cases, the rules were not implemened.

According to the records of Ashashuni police station in Satkhira, there are 360 cases with this police station for breaking embankments. But the cases have been frozen. No one was arrested and no one was convicted in the cases. The cases were not settled.

According to the records of Shyamnagar Police Station, 800 cases were registered in the upazila since Aila due to various reasons including cutting embankments, setting pipes, making holes in embankments and not keeping outer drains. Of these, the High Court gave stay orders to about 500 cases. Some of the accused were detained for 5-7 days but they were later released. However, no one was arrested. Those who detained are workers of fish farms.

According to the investigation, WDB lodged a complaint with the local police station after seeing the damage to an embankment. Later, the police filed a case as plaintiff.

About the case, Mohsin Alam Moral of Napitkhali village under Gabura union said “In 2011, salt water was taken from a river through making holes in an embankment in some areas. After searching the whole union, WDB made a list of shrimp farmers and filed a case against them. Later, we all went to Dhaka and appealed to the High Courtl. Our lawyers were Barrister Jamiruddin Sarkar and Barrister Moudud Ahmed. Within 15-20 days of the appeal, we were acquitted”.'

The corrrespondent asked a question to Mohsin Alam Moral “Damage to embankments is wrong, a case can be filed in this regar?”

In reply, Mohsin Alam Moral said “I knew. But we have nothing to do. If you want to cultivate shrimp, you must take salt water from rivers. I took water without damaging the embankment. We know that the demage of the embankment means our loss. However, a case was filed against us”.

Habibun Nahar, Deputy Minister of the Ministry of Environment, Forests and Climate Change, said “Dams were damaged due to activities of shrimp farmers. As a result, shrimp farming are causing environmental disasters. This is also an impact on public life. New crises are being created and there is no way to come out from those.  No one is trying to resolve the probelms. In many ways, we have understood people but it did not bring any fruitful result. If the land owners do not want, we can not create pressure on them”.

Shrimp farmers also demand embankments
There are many allegations against shrimp farmers, now we will try to know about their opinions. Mostafa Kamal Jahangir, president of the Paikgachha Upazila Shrimp Farmers’ Association, categorically denied the allegations, saying “Everyone is blaming the shrimp farmers. But no one is thinking about this that if embankments are damaged, tidal surge will first wash way the shrimp farms”.

Mizanur Rahman claims that we try not to damage embankments in any way. Our family used to cultivate shrimps before Aila but suffered huge losses due to Aila. The amount of loss in Ampan is about Tk 3 lakh. The embankment collapsed and all fish famrs were washed away.

It was learnt that although there are many allegations against shrimp farmers, they want strong and durable embankments. Not only Mizan Moral but alo all shrimp farmers have the same demand. Everyone has said that if the embankment is fragile, there will be more posibility to wash away shrimp farms. So, why we will damage embankments? 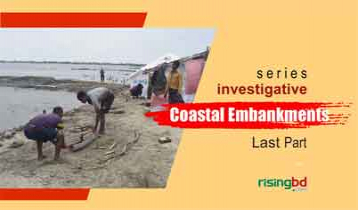 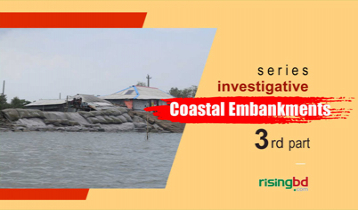 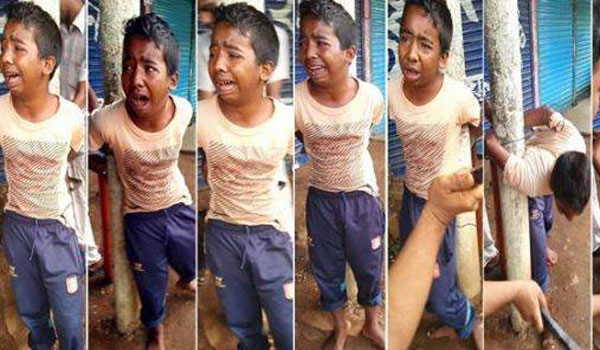 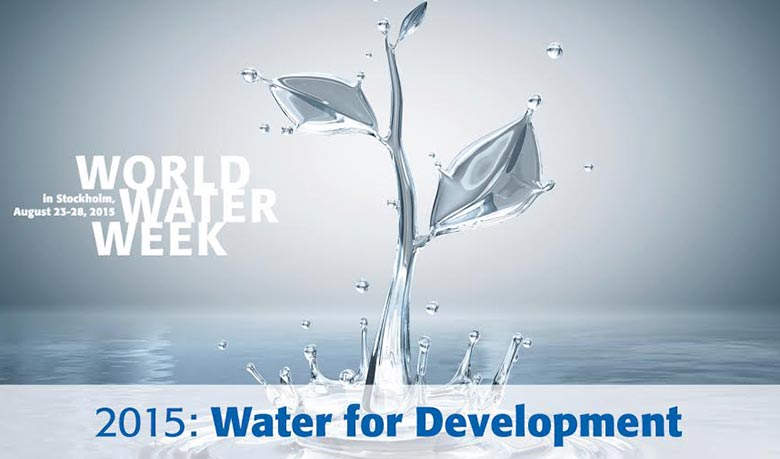 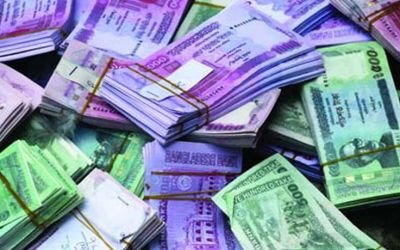 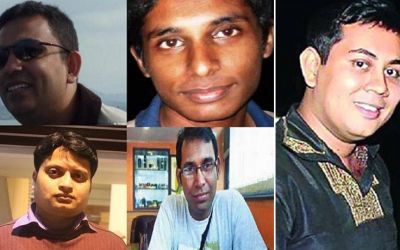