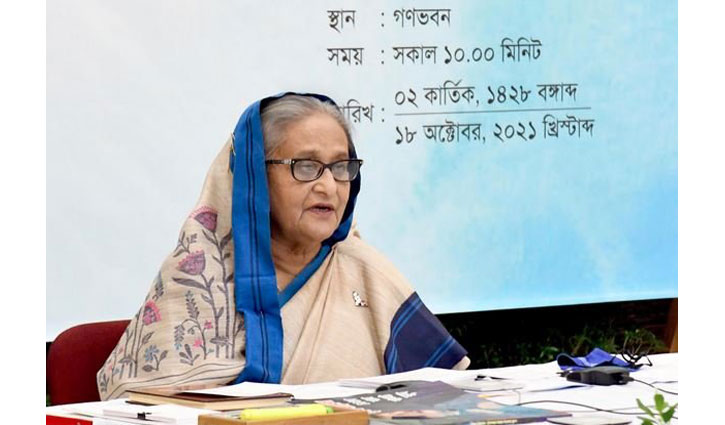 Prime Minister Sheikh Hasina on Monday (October 18) called upon the nation to remain alert against 1975 like killings, coups and conspiracies that could hinder the country's prosperity.

"I urge the nation to be alert against killings (like 1975), coups and conspiracies in Bangladesh that can impede country's progress and also against assignation of children," she said.

The prime minister said this while formally opened the "Sheikh Russel Day" and distributed "Sheikh Russel Gold Medal" among the winners on the 58th birthday of Sheikh Russel, the youngest son of Father of the Nation Bangabandhu Sheikh Mujibur Rahman, through video conferencing from her official Ganabhaban residence in Dhaka.

The prime minister mentioned that the Father of the Nation had enacted a law in 1974 to ensure security for the children, saying, "How much unfortunate it was that his children had to die by the hand of killers."

Sheikh Hasina, the eldest sister of Sheikh Russel, said with an emotion charged voice that the killers brutally assassinated Russel on August 15 in 1975 after killing his father, mother, brothers, and uncle (chacha) as he wanted to go to his mother.

She questioned: "Why was the baby killed? What was his guilt? What was the guilt of others? Was it a crime to liberate the country?"

The premier said that her government has been trying to ensure that no such incidents would take place in the future.

Describing the children as "future of the coming days" she said, "I want everyone to perform their duties accordingly to give the children security, love and a beautiful and meaningful life."

Sheikh Hasina called upon the children to pay attention in study as nothing is as worthy as education._BSS.