Shakib Al Hasan, an extraordinary talent and a player for all formats of cricket, has recently become ‘Talk of the Town’ on various issues since his return from the ICC embargo.

He creates a huge hue and cry everywhere not to maintain isolation back from the United States and going to inaugurate a super shop in a few hours without coronavirus test.

Recently, on his way to India, Shakib broke a mobile phone of a fan while he was taking a selfie at Benapole.

An youth has also threatened to slaughtered Shakib on Facebook live. All in all, Shakib has been becoming controversial on various issues recently.

Meanwhile, Shakib chose social media to explain his position on these issues. On Monday (November 16) evening, he posted a video clip of 8 minutes and 53 seconds on YouTube. Shakib expressed regret and apologized repeatedly for taking part in the event in Kolkata.

In the video clip Shakib said, “The matter is certainly sensitive. But I want to say at the very beginning that I consider myself a proud Muslim and I try to observe that as well. But there will be mistakes, and with these mistakes we move ahead in life. I apologize to you for any mistake I may have made. I apologize for any inconvenience that may have upset your heart.”

Explaining his participation on the puja ceremony, Shakib said, “I have gone to inaugurate the puja according to the news or media reports. But I did not actually go there for that (inauguration of puja). You must get proof of that.”

He said, ‘There were a lot of journalist brothers and sisters at the programme, who may have been invited. Also if you look at the invitation card, that reads who actually inaugurated the ceremony. The inauguration was actually completed before I reached there. The place or stage where the ceremony took place was never a puja mandapa. There was another stage next of it. The whole event was actually token place there. I was there for about 40-45 minutes. And there was never any talk of any religion or any caste.”

Shakib said, “When I had to get in my car at the end of the ceremony, as there was a puja next to it, many of the roads were actually closed. Normally I had to cross the puja mandapa, which I went to. On the way, I light the lamp at the request of Paresh Pal who invited me. As I had been playing in Kolkata (Kolkata Knight Riders) for a long time, the people of Kolkata like me a lot, the journalists there were also very curious, at everyone’s request a picture was taken with Paresh Pal while igniting the lamp.”

“At the end of the photo shoot, when I was leaving, there was a bit of an argument with the journalists who were in my security, a little bit of a scuffle. We could not go that way because of that incident. Later I went back and took another road. So the whole thing was that for 30 to 40 minutes we were on the stage that was set up for us, and I repeat, there was no discussion on religion and caste,” he added.

Shakib said, “Everyone has talked about the two minutes I was in the puja mandapa and guess that I inaugurated the puja. I have never done that and as a conscious Muslim I will not. Even then, maybe it was right for me to go there, if you think so, I am sincerely sorry and apologize. I think you will take this with forgiveness. I will try to  be very much careful so that no such mistake happens again in the future.”

He said, “I want to give you some information to let you know. I also have the invitation card. I also tell you who was actually initiator of the puja. The inaugural speaker was Firhad Hakim, Administrative Head, Kolkata Municipality, Minister, Government of West Bengal. He inaugurated the puja before I reached the ceremony. Then I went there and joined the ceremony, lit the lamp at Paresh Pal’s request and took the picture standing with him at the request of the journalists.”

“Yes, you may have felt the excitement considering the background, or you thought it happened. In fact, looking at a picture, I think you can never guess the whole story. Even then, I never had any intention of making my religion smaller and making other religions bigger, there was no such thing,” he said.

He said, “I think Islam is a religion of peace. Although I have very little knowledge, I am still trying, I will try more in the future, so that I can gather more knowledge about Islam and follow the rules of Islam. Yeah, I haven’t always been able to do it or still can’t. But I have an aim, I will follow everything in the future.”

“The only thing I can say is that we should not do anything that would leave people in a dilemma as to whether we are one or different. Because, as long as we are one, we are strong. We can give different examples if we want, I can give many examples myself. But I do not want to give that now. I hope that those of us who are Muslims will always be one. It is important for us to be one, our unity is very important. Whenever we are separated, we are weak. As long as we are one, we are stronger,” Shakib added.

“There are many of you who are very wise, very knowledgeable, I will definitely try to listen to their good advice. If anyone wants or can tell me something good, I would welcome it,” he said.

He said, “In one or two places I see, I really do not see much of this and do not focus. Many people tell me ... In fact, now it is the age of social media, many things cannot be avoided. Since many people are placing a lot before my name including Sri Sri, Sindur, Pradeep, Mandir, I do not understand how much we are taking our religion up or down with this. Hopefully, we will all play a responsible role from our place. I still apologize to everyone and I will try to play a responsible role.” 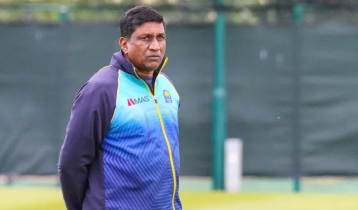