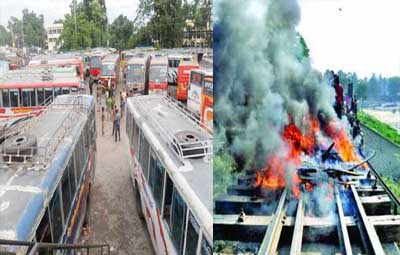 The blockade started at 6am on Saturday and it will continue until 6am Tuesday.

Besides, a dawn-to-dusk hartal (general strike) called by the Dhaka City BNP is being observed in the capital today (Sunday).

However, the 24-hour hartal which was set to be enforced from this morning has been reduced by 12 hours.

According to the revised timing, the hartal would be observed from 6am to 6pm today, BNP’s Assistant Office Secretary Shamimur Rahman told reporters.
However, he did not explain why the hartal time has been reduced by12 hours.

It may be mentioned that BNP leader Sadeq Hossain Khoka was arrested from the city`s Uttara on Wednesday night in connection with several cases including setting vehicles on fire at Luxmibazar and Shahbagh in the capital.

Meanwhile, the first day of the blockade was marked by violent incidents like clashes, arson attacks, bomb blasts and vandalism without major incidents in different parts of the country.

Besides, a minor boy Mahir Ahmed, 6, and his father Mazedur Rahman, 45, suffered bullet wounds as police opened fire on a Jamaat-Shibir procession at the city’s Malibagh Chowdhury Para on the day.

After the end of 131-hour blockade programme protesting the election schedule, BNP joint secretary general Salauddin Ahmed on Thursday announced the 72-hour nationwide blockade through a video message sent from an undisclosed location.

The opposition combine has already enforced 202 hours of road-rail-waterway blockade across the country in two spells -– 71-hour and 131-hour ones — after the announcement of the election schedule for the 10th parliamentary elections that left at least 45 people dead.

On November 25, the Chief Election Commissioner announced that the 10th parliamentary elections will be held on January 5 next. 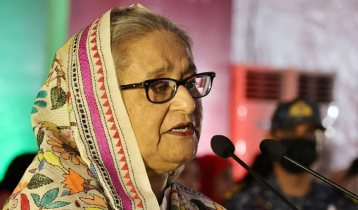