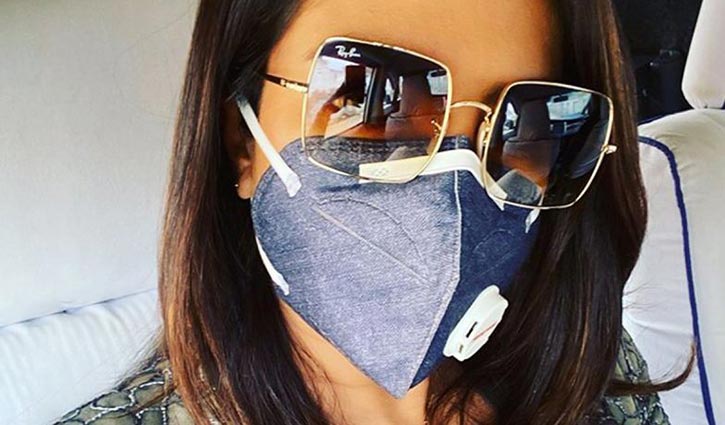 Priyanka Chopra Jonas is back to Delhi and this time to shoot for her upcoming Netflix project, The White Tiger. Just like all Delhiites, the international sensation, too, is struggling with severe air pollution in the capital. The Sky Is Pink actress took to Instagram to share a picture of herself wearing a mask while shooting The White Tiger in Delhi.

In the selfie, Priyanka is wearing a blue mask with sunglasses, covering almost all of her face. While sharing the picture, she expressed concern over the deteriorating air quality in the city. She also urged people to think about the homeless who don't have air purifiers and masks to fight the condition. Along with the picture, she wrote, "Shoot days for #thewhitetiger. It’s so hard to shoot here right now that I can’t even imagine what it must be like to live here under these conditions. We r blessed with air purifiers and masks. Pray for the homeless. Be safe everyone. #airpollution #delhipollution #weneedsolutions #righttobreathe (sic)."

The situation in Delhi was somewhat similar this time last year when the actress was in the city to shoot for Shonali Bose's The Sky Is Pink. During that time, the cast was seen wearing masks and expressing their concern over the bad air quality in the city.

Farhan Akhtar had shared a picture of himself and Priyanka in which they were seen preparing for their shot wearing masks. Farhan captioned the photo, "Masking our emotions in the Delhi air. @priyankachopra your pose is just #bts #prescenereading #theskyispink (sic)."

The air quality of Delhi has deteriorated since Diwali. On Sunday, the air pollution levels peaked at 14 times the safe limit causing all schools to be declared closed by the Delhi Government till Tuesday. According to the Central Pollution Control Board, Delhi's 24-hour average air quality index stood at 494 at 4 pm on Sunday, the highest since November 6, 2016.

Coming back to Priyanka Chopra, the actress will be seen next in the Netflix project, The White Tiger, based on Aravind Adiga's book of the same name. In the film, she will be seen sharing screen space with Rajkummar Rao. This is the first time the two actors are working together.