All of us should be aware of fire 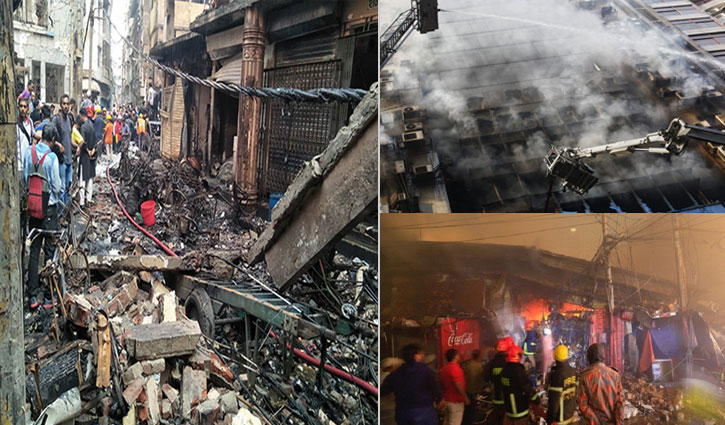 People and properties were gutted in the incident of fire at the capital’s Churihatta of Chawkbazara area, FR Tower of Banani and DNCC market of Gulshan. At least 71 people were killed in Churihatta fire while 26 in Banani.

These incidents showed us again that how unprotected Dhaka is? How unsafe lives of people here are?

Lack of security prevails everywhere from Old-Dhaka to posh areas in the capital. Here dwellers are panicked in spate of recent fire incidents.

Not only in Dhaka, people are dying by fire in other parts of the country too. Properties are being gutted. It seems fire incidents take away sleep of people. News is frequently found that slams, garment factory and industries were gutted. All of us carry a question in mind what’s the way of getting rid of inferno?

Nearly 16,000 fire incidents happen every year. According to Fire Service, more than 1.30 lakh incidents of fire occurred in last eight years, killing more than 2000 people in the country. Nearly 70 percent of the incidents were caused by electric short-circuit. Of the fire incidents, most took place in the capital.

Three terrible fire incidents in the capital, which killed many people, fell people in thought. Allegations were found that the fire incidents took place due to lack of unconsciousness, violating housing policy, adequate equipment of firefighting and the lack of supervision of concerned division.

According to rules, fire clearance certificate is must from Fire Service in case of building residential houses above six-storey.

There are several thousands of high-rise residential and commercial buildings the capital. Are there sufficient fire extinguishing measures in the buildings?

Though fire extinguishing materials are found in many buildings, but there is question how these are effective? Narrow upstairs are found in some buildings. The upstairs of FR Tower of Banani, where deadly fire broke out, are just 3 feet in width.

Traders of Dhaka North City Corporation (DNCC) market in Gulshan lost their everything by double fire incidents in two years. Now it is being said of taking different initiatives. We are hearing of operations to be conducted to identify buildings made of violating policy and sufficient fire extinguishing system. But there are also questions about the outcome of the drives. Various activities are seen after every fire incident. Concerned divisions take different initiatives to prevent fire incidents.

But it is necessary for us to end the anomalies for the safety of us.

Prime Minister Sheikh Hasina also came up with a set of directives to prevent fire incidents.

Housing and Public Works Minister SM Rejaul Karim said, “We do not want to see any more burnt death. We could not allow any single risky building in Dhaka city. This time, we will truly take steps. The government is committed to ensure people’s housing security.”

For this, joint initiatives of Rajuk, Housing Department, Environment Department, City Corporations and other concerned institutions are needed for ensuring effective measures.