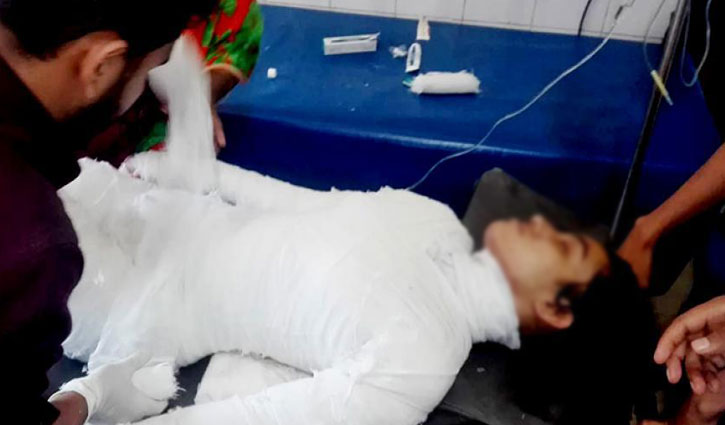 The incident of attempting to murder Feni’s Madrasa student Nusrat Jahan Rafi is very hateful and painful as well.

Such a gruesome incident is unfortunate in the modern society which created concerns. It is more unfortunate that principal of the madrasa is also involved in the hateful incident.

The female student was attempted to murder setting her on fire as she refused to withdraw case filed sexual assault. The incident hint as we went back to the ancient, cruel era.

According to reports published on media, Nusrat went to madrasa to appear in Alim Arabic (1st paper) examination on Saturday. Several students wearing burqa took her to the roof top of the administrative three-storey building. They threatened her to withdraw the case filed against the principal, but she refused. At one stage, they poured Kerosene oil on her body and set her on fire, leaving her seriously burnt. Nusrat sustained around 80 percent burn injuries. She has been currently battling for life at Intensive Care Unit (ICU) at Burn Unit of Dhaka Medical College and Hospital (DMCH). She has been put on life support since Monday.

We cannot find any proper word to express condemns of the incident. Attempting to murder a student at own educational institute by setting fire on the body is very unprecedented. The most dangerous thing is her classmates attempted to burn her death. We think exemplary punishment should be ensure to those are involved in the incident and principal of the madrasa.

Allegation of sexual harassment was found against the principal earlier. If then steps had been taken against him, probably Nusrat could not be victim of fire.

The principal has already been suspended temporarily. Prime Minister Sheikh Hasina has instructed to ensure better treatment to Nusrat and to take stern actions against those are involved in the incident.

It is not a fresh incident for female student to become sexually harrased at educational institutions. We found some allegations frequently. Many of the incidents cannot come to light. So, culprits escape punishment. Many of the victims do not disclose the incidents in fear of harassment and social status. Taking this privilege, culprits are going disparate and committing same deeds again and again.

Finally, we want to see exemplary punishment against those are involved in attempting to kill Nusrat by setting her on fire.