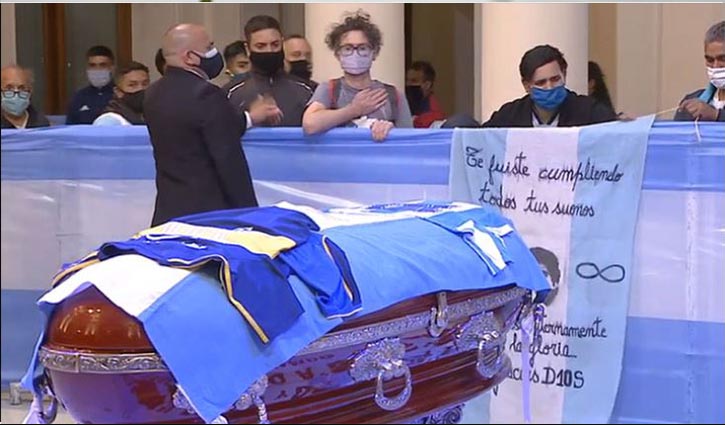 Argentine football legend Diego Maradona was laid to rest beside the graves of his parents on Thursday after a private funeral on the outskirts of Buenos Aires.

As darkness fell, he was interred after a simple religious ceremony attended by around two dozen family and close friends in the leafy surrounds of the Bella Vista cemetery outside the capital Buenos Aires amid a global outpouring of grief.

Police officers escorted the hearse carrying the body of Maradona to the cemetery and hundreds of fans lined up along the streets to send him off.

The burial followed a day of high emotion that saw clashes between police and fans near the presidential palace in central Buenos Aires where Maradona lay in state in a closed casket for people to say their final farewells.

Starting at dawn on Thursday, thousands of fans had formed a snaking line estimated at over 1.6 kilometers long through the streets of Buenos Aires near the plaza, after a night of mourning and reminiscing.

Fans who got inside the palace – many missed out – threw soccer shirts, flowers and other items towards the casket.

Maradona died of a heart attack on Wednesday aged 60.

His death triggered mourning around the world but nowhere was it felt more fiercely than in a country that saw him as a national hero.

Maradona's coffin - draped in Argentina's national flag and football shirt, bearing his trademark number 10 on the back - was on public display at the presidential palace on Thursday.

By mid-afternoon queues stretched back for more than a kilometre, and police clashed with mourners as they tried to close off the palace in anticipation of the wake scheduled for 16:00 local time (19:00 GMT). 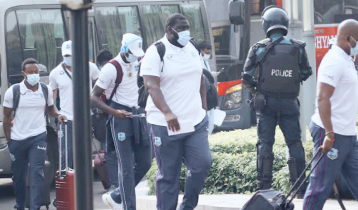