Lionel Messi-led Argentina on 22 November were stunned by Saudi Arabia as they defeated the two-time World Cup champions by 2-1 while playing their opener during the FIFA World Cup 2022 at the Lusail Iconic Stadium in Qatar's Lusail.

Despite a star-studded side, Argentina did not have a clear dominating side. Messi and Emiliano Martinez though did some magic in the first 10 minutes and kept the ball within the Argentinian feet.

However, referee Slavko Vincic decided to award a penalty shoot out to the Argentinians as Saudi players foul an Al Beiceleste star. Messi took the shot and hit it to the keeper’s right with aplomb in the 10th minute. With this, Messi has become the first Argentina player to score at 4 World Cups. This gave Argentina a lead by 1-0 against Saudi Arabia.

The game proceeded and Argentina's Messi and Martinez scored the goal. But they were ruled out for offside. The Argentinian fans were voicing their frustration after the VAR decision.

Even after the referee Slavko Vincic added five minutes in the first half, Saudi Arabia could not score a goal and Argentina managed to keep the lead.

However, it was not the case after the half-time, and Saudi Arabia seemed suddenly attacking.

In the 48th minute, Saudi Arabia equalized the the score with Saleh Al-Shehri scored a goal with a neat finish after a straight pass through the Argentinian defence.

Messi-led Argentina could hardly digest the change in score card, Saudi Arabia's Salem Aldawsari spanks a right-footer to the top left corner at in the 53rd minute. This resulted in Saudi Arabia 2 - 1 Argentina.

During the game at the 67th minute, Saudi Arabia's Abdulelah Al-Malki awarded with a yellow card for a late challenge on Argentina's Nicolas Otamendi.

Despite several attempts, Messi was denied a goal, as Saudi Arabia' s goalkeeper Mohammed Al-Owais restricted him with his brilliant saves. However, Owais was awarded a yellow card in the 90th minute for remonstrating with the referee.

Eight minutes were added to the game, but there was no change in the result and the Green Falcons (Saudi Arabia) stun Argentina 2-1 in the opener of Group C of FIFA World Cup 2022 in Qatar. 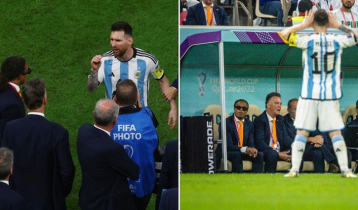 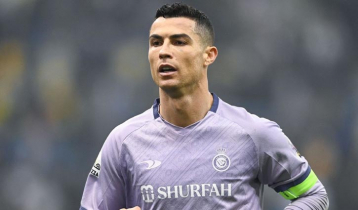