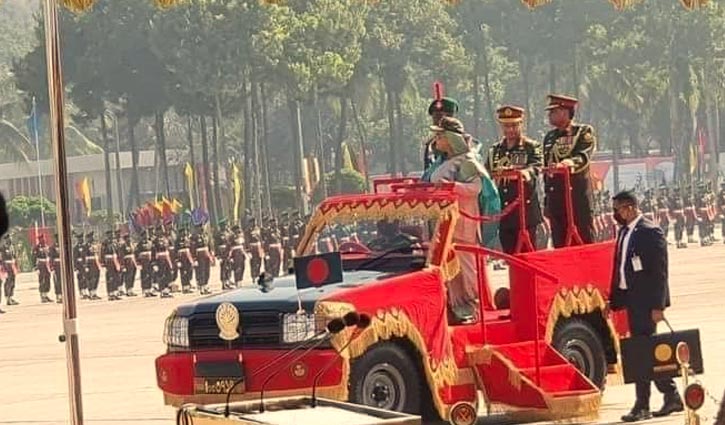 Earlier, a helicopter carrying the prime minister landed at the BMA Parade Ground around 10:30 am on Sunday (December 4).

On her arrival at the BMA Parade Ground, the prime minister was received by the Chief of Army Staff, the General Officer Commanding (GOC) of Army Training and Doctrine Command (ARTDOC), the Chattogram Area Commander of Bangladesh Army and also GOC of 24th Infantry Division and the BMA Commandant.

The prime minister took salute and reviewed an impressive march-past as the chief guest at the parade ground.

She was accompanied by Chief of Army Staff General SM Shafiuddin Ahmed and BMA Commandant Major General SM Kamrul Hassan while she reviewed the parade riding in an open jeep.

The prime minister addressed a ceremony as the chief guest at the parade ground of Bangladesh Military Academy (BMA), Bhatiary, Chattogram marking the President Parade-2022 of the passing out cadets of the 83rd BMA Long Course.

Prime Minister Sheikh Hasina will address a public rally at the Polo Ground here in Chattogram this afternoon.