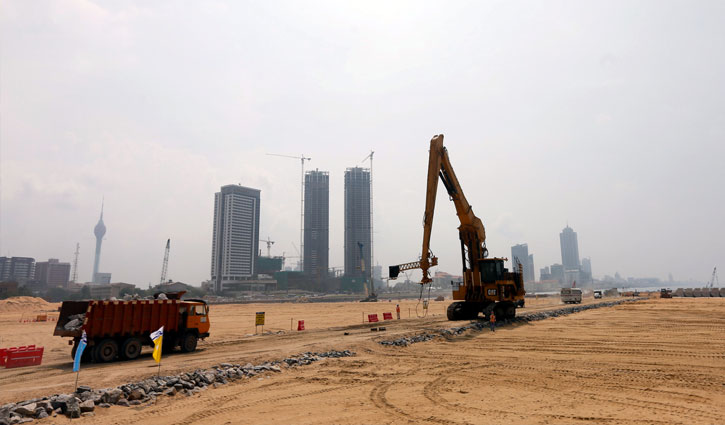 The term 'Chinese Debt Trap Theory' is now a common complaint in development discourse. It is said that in order to ensure its global dominance, China is providing huge loans to the developing countries of Asia, Africa, and Latin America, mainly for highways, railways, deep sea ports, power generation plants, mineral extraction projects, and many others by offering easy terms. Most of the countries are tempted to invest the loan money in such projects whose 'Economic Feasibility' is shaky, and after the completion of the project, the Chinese debt cannot be paid off from the income of those projects.

As a results, these countries one after another are trapped in the trap of Chinese debt, and are forced to hand over the long-term authority of those projects to China or to give China various benefits that are against their sovereignty. In this regard, they give an example of the recent economic disaster in Sri Lanka. United States and its alliance raised their finger to China that developing countries are going bankrupt because of Chinese debt. So, the question is, does China really create a debt trap for the developing countries?

China is investing using its own economic capabilities, and the Belt and Road Initiative (BRI). The ‘Belt and Road’ initiative is by far the largest intercontinental mega-project in human history, put forward by China in 2013. According to the analysis of Aid Data, 13 thousand 427 Chinese development projects worth 843 billion dollars are working in 165 countries of the world.

Critics say China has deliberately trapped Sri Lanka in debt and blamed for today's situation. China accounts for only 10% of Sri Lanka's debt burden, but China is being blamed for 90% from the western countries. Apart from China, the Sri Lankan government has been borrowing from various international currency markets, the Asian Development Bank and Japan for a long time along with internal borrowing. On 29 March 2020, the Hindustan Times reports that 36.4% of Sri Lanka's debt is in international sovereign bonds. Next in the list are the Asian Development Bank (14.6%), Japan (10.9%) and China (10.8%). So, blaming China for Sri Lanka's bankruptcy is tempting but not realistic.

In 2021, various media outlets reported that China had seized Uganda's Entebbe International Airport in a debt trap. The Chinese and Ugandan governments denied the allegation. The news agency Bloomberg checked the documents of the agreement and said that this allegation is not true, they did not find any debt trap.

China's 'Debt Trap' was first brought forward by the US-controlled financial institution IMF in 2006. Then in 2011, then-Secretary of State Hillary Clinton called China's lending program in Africa 'Debt Trap Diplomacy', referred to China as the 'new colonialist' and advised African countries to be cautious about borrowing. Under former US President Donald Trump, the Office of the Secretary of State released a document titled 'The Elements of the China Challenge'. It vigorously promoted China's theory of 'debt trap diplomacy'. In 2018, then-Vice President Mike Pence called China's lending program "debt-trap diplomacy". This is how the United States and its controlled global economic institutions first brought forward China's 'debt-trap' phenomenon with the help of their controlled media were able to turn it into a global discussion.

If you don't just listen to the West and do a little research, this China-centric noise seems to be very inconsequential. While much is heard about how China is acting as a neo-colonial power but never heard in the western media about how China waived its debt to poor countries, mostly in Africa. According to the Forbes on 29 May 2019, over the period 2000 to 2018, China has written off around $9.8 billion of debt to other countries, and around 50% of China's cancellations have gone to highly indebted poor countries.

On 20 November 2020, China's Finance Minister Liu Kun said China has extended debt relief to poor countries worth a combined $2.1 billion under the G20 framework. He added, China International Development Cooperation Agency, the country’s aid agency, and the Export-Import Bank of China, the official bilateral creditors, have suspended debt service payments from 23 countries, worth a total of $1.353 billion. According to the Oxford China Africa Consultancy at Oxford University, Cuba received debt forgiveness $6 billion in 2011. Sudan and Zimbabwe were on the receiving debt forgiveness more than three times". Outside of Africa, other large cancellations include Pakistan ($500 million) and Cambodia ($490 million).

An article by Chris Devonshire Ellis on the Silk Road Briefing website claims that China typically lends at 2% interest with repayment over a ten-year period. Dr Ishrat Hussain, advisor to the Pakistani Prime Minister of Institutional Reforms and Austerity dismissed the Chinese debt trap theory and said that China offers very cheap loans at 2.34% interest. Data provided by the World Bank shows that between 2016 and 2019, "Belt and Road" member countries increased their exports by an average of 28.8% because of infrastructure and ports build helping smaller economies export sales worldwide.

There are fundamental differences between Chinese debt relief, and debt relief from the United States and its controlled global financial institutions. China does not involve itself in the internal political mechanism of any country outside the world. On the other hand, the United States and its controlled global economic institutions work in the internal political-economic policy-making of aid-seeking countries in addition to lending. When it comes to lending, China never compromises on three things "discuss together, build together, and sharing together". It can be said without doubt that China's lending policy is essentially a win-win situation for developing countries.

Instead of colonialism, China provides 'solidarity' between developing countries. The idea of solidarity was first brought up by Chairman Mao Zedong, since then, China has built trade and investment relations mainly with a vision of mutual cooperation. Chinese debt-financed physical infrastructure projects have recently become attractive to many developing country governments as an attractive alternative to the US-dominated World Bank and regional banks such as ADB, AFDB, CDB, and IDB for development financing. Hence, propaganda about the 'China Debt Trap' has emerged as a major weapon of geopolitical strategy. Chinese loan can be a boon for the poor and developing countries of the third world. But the western world is not very satisfied with this initiative of China.