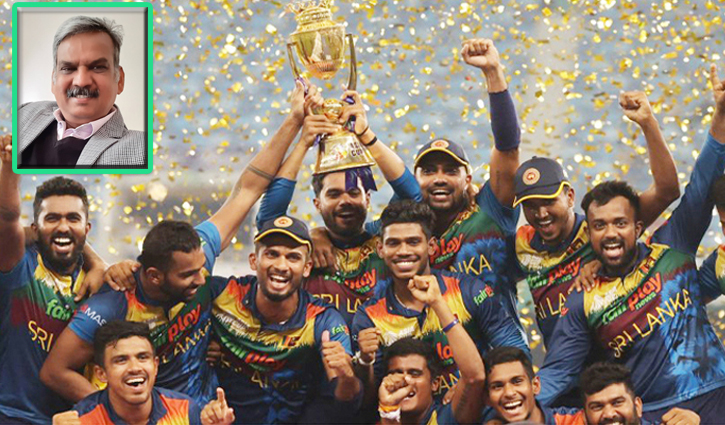 There is no kerosene. The stove is not burning in the kitchen. Fishermen have no way to go to the sea with a fishing boat. Where is the fuel of boats run by an engine? There is long tailback of cars, taxis in front of petrol pumps. People are getting less fuel by rationing.

These are the problems Sri Lanka, an island country in South Asia, is facing for long. Its 22 million strong population is struggling with huge price increases for food, power, medicines and other necessities. The entire Sri Lanka is in extreme economic recession. Inflation is unusual. Prices of daily essential commodities are skyrocketing. The entire country is reeling under economic crisis, political instability and chaos. 360 Sri Lankan rupees now equals to 1 US dollar.

Faced by a myriad of problems, the island country forgot to laugh. That Sri Lanka laughed an ecstatic laugh on Sunday (September 11) night. The laugh of success. The laugh of winning cricket. The victory of Asia Cup trophy will not remove the ongoing political crisis or economic recession, but what it will give is a little smile in the day of woe. A sting of blissful relief at the corner of the bleeding lips. A team of eleven players on the cricket field managed to bring a temporary smile to the people of the entire country riddled with a myriad of problems; Sri Lanka’s Asia Cup victory is the story of winning that spirit. It’s a part of pride.

It is noticeable that none of these Sri Lankan players who won the Asia Cup title showed any swagger before the start of the tournament. But they tried in every match how to fight and win in the field. They also showed a way to master in all situations. So, they are smiling today. Mashrafe Bin Mortaza rightly said – ‘The lion does not have to shout every day that I am the king of the forest. He only thinks in his mind that I am the king of the forest. Well, that’s enough for him’.

Sri Lanka fought throughout the entire tournament as a united and energized team. Due to economic reasons, this is the first time in the cricket world that a country could not host the tournament on its own soil. Even if a host country has previously changed venue due to natural disasters, war or political crises, security issues; This is the first time this has happened only for economic reasons. It is a regretting matter for a country not being able to host the tournament on its own soil due to economic crisis. Sri Lanka could not host a regional tournament like Asia Cup although the country previously hosted world cup tournament. And this happened as the country has no adequate supply of fuel and electricity and financial consistency. Although it was a host country, it had to play outside the country. It can be said for sure that if this would happen for another team, it may break down mentally. But trapped in such a hard situation, Sri Lanka managed to overcome the situation and brought smile to the whole nation.

Sri Lanka began the tournament with defeat to Afghanistan but it did not lose hope. Rather, the country corrected their mistakes and pledged to do the best in upcoming matches. That’s why they won next five matches! The close match with Bangladesh in the group stage increased the strength of Sri Lanka. They got a clear notion about their strength. Before that match, it was heard from Bangladesh side that: ‘There was no star player in the Sri Lankan squad. There was no world class bowler.’ Sri Lanka just heard such words from Bangladesh side but gave a befitting reply in the field. Before the start of the match, every single disregard of the opponent side strengthened the Sri Lankan squad much more. They showed their best performance in all sides—fielding, batting, bowling and catching. This way, the combined efforts offered Sri Lankan team a happy ending, adding a blissful moment in time of crisis.

Throughout the tournament, this mental firmness gave them a belief that: ‘We are able to defeat any team and we know well how to win. Imbued with that spirit, Sri Lanka showed that maybe they have no world class bowler but they have a world class team. Ultimately, they proved that unity is strength.

In this year’s Asia Cup, Bangladesh team is failed in these three sides—talent, teamwork and intelligence. But Sri Lankan team is successful to show their performance in these three sides. That’s why they emerged as the champion. And we are doing the homework of T20 basics once again.