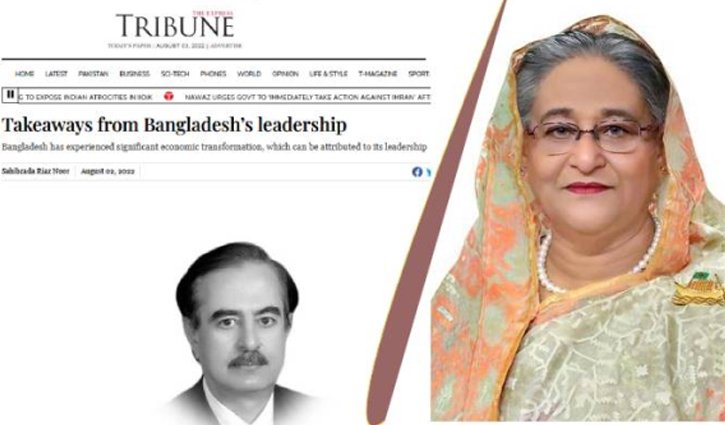 The Express Tribune, a renowned newspaper of Pakistan lauded the charismatic leadership of Bangladesh Prime Minister Sheikh Hasina for the unprecedented economic development in the country and advised Pakistan authorities to learn from her.

The newspaper published an article with the title, “Takeaways from Bangladesh’s leadership, on Tuesday (August 02).

It reports, over the years, Bangladesh has experienced significant economic transformation, which can be attributed to its leadership. Recently, Prime Minister Sheikh Hasina inaugurated the Padma Bridge and declared it a ‘symbol of pride and capacity’.

As early as 1992, Sheikh Hasina was involved in the economic issues and plans for Bangladesh. She undertook the task of balancing economic policies with political implications. Sheikh Hasina shifted focus from her father’s socialist agenda toward market-based capitalist growth. She learnt from other Asian countries whose economic success was based upon four pillars: political stability, social development, trade liberalisation with export-led growth and fiscal restraint.

During a conference, when an economist began informing her about the benefits of trade liberalisation, Sheikh Hasina quipped, “you don’t have to convince me about trade liberalisation. When I was living with my physicist husband in the Italian city of Trieste on the Yugoslavian border, I watched the border being opened three times a week and people travelling across from both sides, purchasing goods and return.”

This demonstrates that Sheikh Hasina was assiduously focused on economics rather than other considerations that politicians are attracted to.

Even though between 1971 to 2009, Bangladesh had hiccups in accountability campaigns and military rule, since 2009, the army has taken the back seat. Bangladesh has seen less frequent derailment of civilian governments and experienced little legitimisation and delegitimization of governments. Although its democratic history is not untainted, Bangladesh’s government has largely avoided public criticism about corruption and inefficiency.

Despite having little experience in governance, the Prime Minister possessed visionary acuity and conviction that economic progress was the only way to alleviate poverty in the country.

Although marred by allegations of coercion of opponents, after over fifteen years of sustained growth, Bangladesh has become one of the fastest-growing economies in the world. Back in 1970, the country was 75% poorer compared to Pakistan but now it is 45% richer. In 1970, it had 10 million more mouths to feed but now its population is 170 million compared to Pakistan’s 230 million.

In 2022, its gross domestic product (GDP) is $411 billion compared to the $347 billion in Pakistan. The annual inflation rate is 6% compared to Pakistan’s previous 12-15%, which has now risen to 21% and is expected to further increase. Also, the Bangladeshi taka is much stronger compared to the Pakistani rupee. Importantly, Bangladesh has a strong literacy rate with high female participation in the economy.

In Pakistan, political parties have remained interested in personal gains. The repeated manipulation of the democratic process has stymied the growth of strong, democratic, and non-dynastic parties. It is worth recognising that economic growth is closely tied with political stability, rule of law, strong civilian institutions, and participatory democracy.

Pakistan inherited an overdeveloped state with a feeble bourgeoise linked in a patron-client relationship with a powerful state. The country has inevitably witnessed an economic and political evolution marked by privilege and patronage. Agriculture and business incomes are primarily excluded from the tax net. There is an absence of progressive wealth tax and huge industrial and estate complexes are exempt from any levies. Our parliament is dominated by landlords, it is a small wonder that agriculture income tax has been relegated as an inconsequential subject to the provincial domain. Consequently, the tax net remains small as agriculture and industrial sectors are undertaxed.

Since 1958, all experiments with the government have augmented feudal power instead of empowering the masses. The growth path pursued in Pakistan has been skewed in favour of the privileged, rich, and elite who must now make their fair contribution to the state.

Following Bangladesh’s example, Pakistani leadership must pursue economic growth as the national agenda and adopt constitutionalism along with regional peace. Without compromising viable defence, adequate resources must be released for social and economic development. Considering that regional avenues of growth necessitate trade liberalisation, foreign trade agreements must be formed with India, Iran, China, Afghanistan, and other trading partners. Also, the export-led growth model should refocus on high-value-added goods.

Pakistan enjoys a comparative advantage in cheaper labour, which must be transformed to improve skills and productivity. Education and technical training for women must be promoted and adopted widely to increase women’s participation in the workforce. Also, a safe and legally conducive environment is crucial for foreign investments.

A serious effort is required to levy a fair tax on agricultural incomes and the rich industrial cartels must make their due contribution to national wealth. Besides wealth and death taxes, large corporate and estate sectors need to be brought into the tax net.

Pakistan’s leadership can learn many lessons from Bangladesh’s experience, but the main takeaway should be that Sheikh Hasina prioritised economic growth, which is crucial for both defence and democracy.